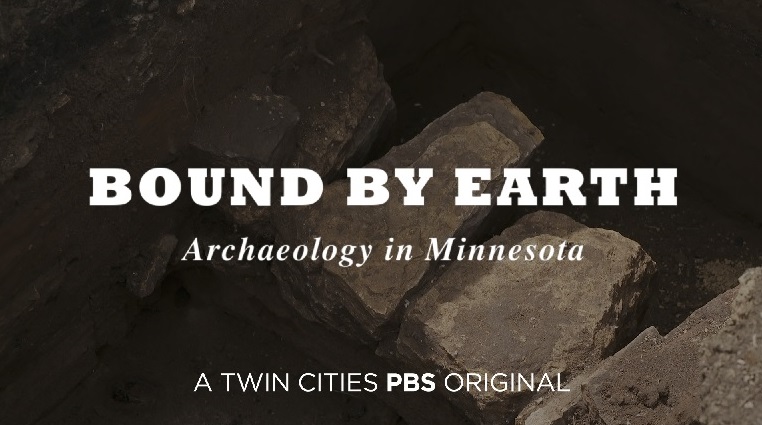 Bound by Earth: Archaeology in Minnesota a Twin Cities PBS original focuses on the science and new technology archaeologists use to uncover and preserve archaeological resources in a non-invasive way. Produced in partnership with the Minnesota Archaeological Society with funding from the Arts and Cultural Heritage Fund.  Premier broadcast is this Sunday, April 19 at 7pm TPT MN  Check listings for later broadcasts.

This is the result of a multiyear effort by the Minnesota Archaeological Society and TPT to present an alternative to the pseudoscience approach to archaeology often seen on media outlets.  It focuses on Minnesota archaeology, archaeologists and Native people.

The State Register for March 9th, 2020 (Volume 44, Number 37) included a request for proposals for investigating two archaeological sites.  The Minnesota Historical Society and the Oversight Board of the Statewide Survey of Historical and Archaeological Sites seek a qualified consultant to better assess the archaeological potential of the King Coulee (21WB56) and Dutchman’s Coulee (21WB55) sites in southeastern Minnesota. The goal of the project is to provide significant new information about the sites, most importantly determining the vertical and horizontal extent of the King Coulee site and the absolute ages of the cultural horizons at both sites. Based on an analysis of soil coring at King Coulee and on detailed analysis of previously recovered information from both sites, the consultant will  develop recommendations for a research design focused on completing a major archaeological excavation. The project cost may not exceed $100,000.

The Request for Proposal is available by contacting Mary Green Toussaint, Contract Manager, Minnesota Historical Society, by e-mail only: mary.green-toussaint@mnhs.org

Proposals must be received by Mary Green Toussaint, MNHS Contract Manager, or her agent by 2:00 p.m. Local Time, Thursday, March 26, 2020. Authorized agents for receipt of proposals are staff located at the Information Desk on the 1st floor of the Minnesota History Center, 345 Kellogg Boulevard West, St. Paul, Minnesota 55102. Late proposals will not be considered.

Archaeology at the Society.  This is the position formerly held by Patricia Emerson who passed away unexpectedly in August.  Applications are due December 3, 2019.   Follow the link below for additional information  https://www.minnesotaworks.net/viewjob.aspx?jobid=10853594

The Minnesota Historical Society and the Oversight Board of the Statewide 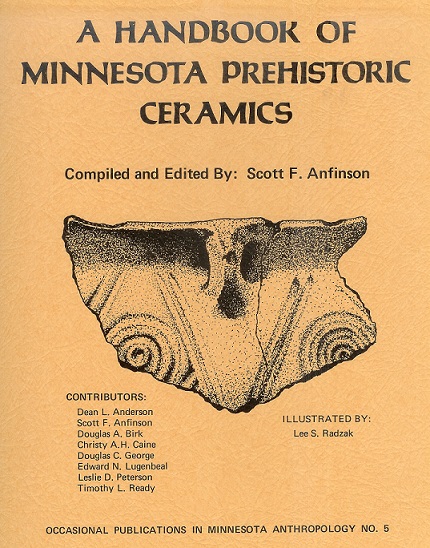 Survey of Historical and Archaeological Sites has posted a request for proposals for the initial phase of assembling a handbook of Minnesota Precontact Pottery.  The purpose of this project is to conduct literature and collections research, facilitate professional discussion and create a new classification system for Minnesota precontact ceramics that will form the basis for eventual production of a finished publication.  Additional phases of  work will occur as funding allows.  The ultimate goal is to create a new version of A Handbook of Minnesota Prehistoric Ceramics originally published in 1979.  Here is the link to the State Register where the announcement is posted on page 921 (page 9 of 14 of this issue)  https://mn.gov/admin/assets/SR43_31%20-%20Accessible_tcm36-369656.pdf  Proposals are due February 19, 2019

The Office of the State Archaeologist (OSA) recently posted several reports for surveys funded by the Arts and Cultural Heritage Fund of the Minnesota Clean Water, Land and Legacy Amendment on its website.  The recent posts include county surveys for Le Sueur and Lac qui Parle Counties, a report on radiocarbon dating in Minnesota and an overview of the Archaic in Minnesota. 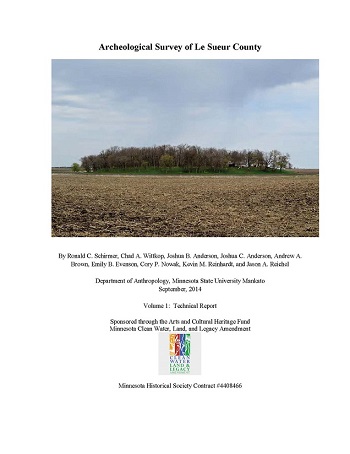 The Le Sueur County archeological survey, undertaken by the Department of Anthropology at Minnesota State University Mankato, was completed in 2014.  The project involved an extensive background literature review, a re-examination of existing collections both public and private and survey of more than 2000 acres of land.  Fifty previously undocumented sites were found.  The report can be found at this link:   https://mn.gov/admin/assets/LeSueur%20Final%20Report%20V1-public-2%20web_tcm36-334427.pdf

A radiocarbon study was completed by PaleoResearch Institute in 2017.  The report was to summarize what was known about absolute dating in 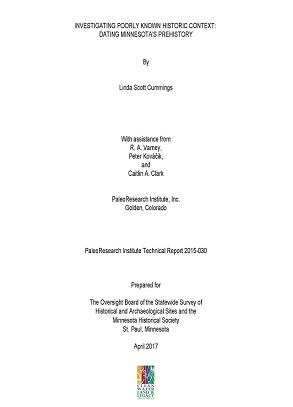 Minnesota, to look at the reliability of the know dates and obtain additional dates from poorly dated contexts.  Reference samples from fish collected in 1939 and 2015 along with wild rice harvested in 2015 were also dated.  A review of the Minnesota state radiocarbon record yielded patterns worthy of note. In particular dates on charred food crusts from ceramics often appear too old, so until reliable a methodology for processing samples is developed it is recommended that food crusts not be dated. Dates on mammal bones from Minnesota also provide a too-ancient chronology. Often comparison with dates on short-lived terrestrial plant remains is impossible, as they are not present in the archaeological record. Charcoal appears to provide the most accurate chronology for Minnesota. Radiocarbon dates on animal bones in Minnesota are often the oldest obtained for individual sites, cultural complexes, or within geographic areas. At present, the reason for this discrepancy has not been researched and remains unexplained. It is recommend not dating additional archaeological bone until original radiocarbon research can be conducted on recent specimens to verify that land animals, as well as fish and ducks (and other birds living on the water or harvesting prey from the water) yield discrepant dates.  To learn more follow this link:  https://mn.gov/admin/assets/Dating%20Minnesotas%20Prehistory%20PRI%20FRE%20Study%202017%20final-web_tcm36-334425.pdf 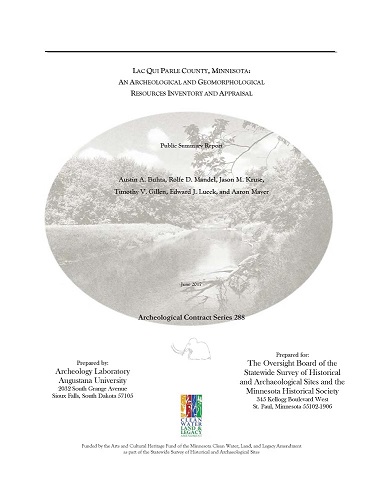 The Lac qui Parle County survey was completed in 2017.  The project was conducted by the Archeology Laboratory at Augustana University.  The survey investigated 4,500 acres of land and documented 46 previously unrecorded sites.  In addition limited excavations were undertaken at site 21LP0011, located on Big Stone National Wildlife refuge.  Previous work at the site had recovered a fluted point base and multiple overshot flakes suggestive of an early Paleoindian presence at the site.  The units produced 251 lithic artifacts; the majority consisting of debitage.  The report is found at this link:  https://mn.gov/admin/assets/Lac%20Qui%20Parle%20Public%20Report%20Final%20web_tcm36-334426.pdf

‘Minnesota’s Archaic Tradition: An Archeological and Paleoenvironmental Overview and Assessment’ presents the results of a review of archaeological and 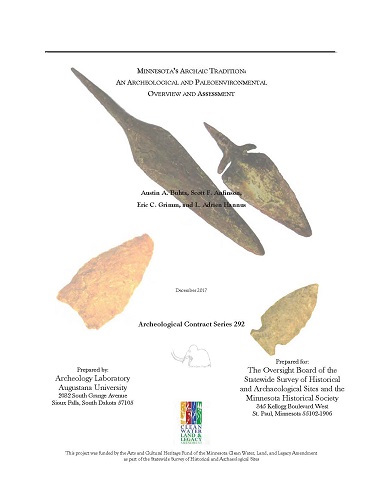 environmental literature, the organization of a symposium focusing on local and regional Archaic topics, an evaluation of the utility of Minnesota’s current division of Archaic tradition historic contexts and a synthesis of the investigation results.  Recommendations are made for future study.  The report summarizes what we currently know about the Archaic in Minnesota and takes a critical look at how we interpret that period.  For the avocational archaeologists there are well illustrated overviews of the artifacts and excavations at most of the major Archaic site excavations in the state.  Follow this link to read more:  https://mn.gov/admin/assets/MN%20Archaic%20Final-web_tcm36-334428.pdf

The Swift County archaeological survey which had been previously posted on the OSA site and inadvertently removed was also reposted for those who have not yet had the chance to review the report.  The Swift County report can be found here:  https://mn.gov/admin/assets/SWIFT%20CO%20SURVEYREPORT%201_31_11-public_tcm36-334429.pdf 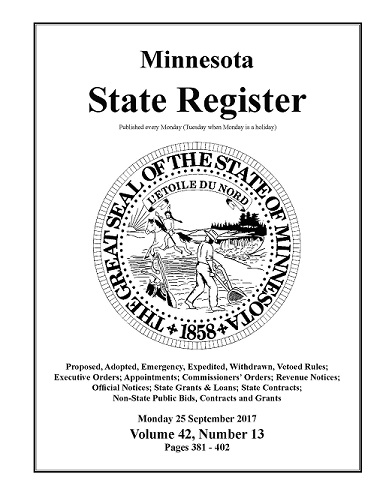 The Monday September 25, 2017 issue of the Minnesota State Register (Volume 42, Number 13) contains an announcement of a Request for Proposals funded through the Legacy Amendment’s Statewide Survey of Historic and Archaeological Sites. This project is an archaeological survey of Watonwan County, Minnesota. Proposals are due on October 19, 2017. 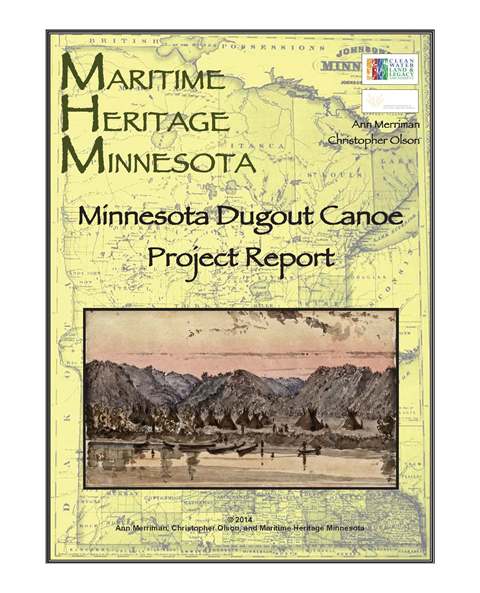 The crew at Maritime Heritage Minnesota recently posted their report on radio carbon dating  dugout canoes found in Minnesota.  Wooden dugout canoes were in use from prehistoric times up through the contact era.  Since most dugouts have been removed from their archaeological context or have few or no diagnostic artifacts recovered with them radio carbon dates are one way to get an idea of their age.  The dates from the 8 canoes investigated ranged from precontact through historic periods.  Check out their well illustrated, interesting, and informative report.  This link will take you to their archive page.

The Minnesota Historical Society recently posted two archaeology related position openings, one for an Archaeologist I position and the other Manager of Government Programs & Compliance.   Applications are due July 25, 2013. 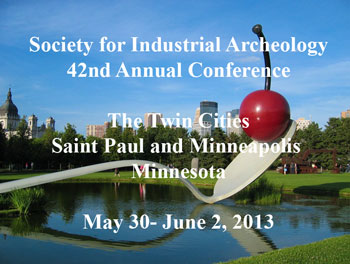 The Society for Industrial Archeology Conference schedule is now available online.  The Conference is to take place May 30 through June 2, 2013 at the St. Paul Hotel in downtown St. Paul, Minnesota.  The event includes a day of formal papers (Saturday, June 1) and a number of tours to industrial heritage sites spread over several days (Thursday, May 30, Friday May 31, and Sunday, June 2).  Online, onsite, and mail in registration is available.