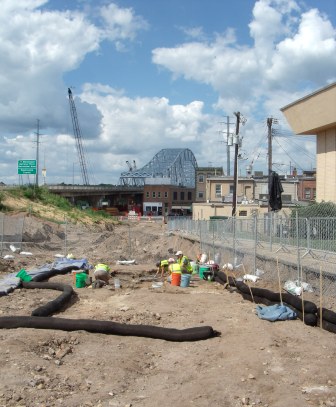 This week near downtown Hastings the folks from Two Pines Resource Group began excavating deposits from the mid19th Century (1800s) that were discovered during construction work for the new Hwy 61 Hastings Bridge.  When one of the existing off ramps was removed an intact deposit of artifacts from early Hastings was found.  Work on a section of the road was halted while an assessment was made of the significance of the artifacts and it was decided to excavate a small portion of the area.

The ongoing excavation in easily viewed from the adjacent city sidewalk.  Work will continue through the weekend and be completed by early next week, pending weather delays. 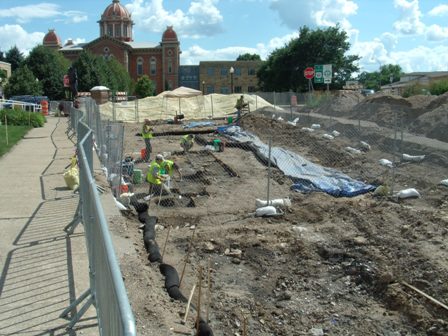 Dr. George Holley of Minnesota State University Moorhead has embarked on the task of piecing together an updated chronology of prehistoric pottery types for western Minnesota.  Starting with an archaeological survey of Swift County, Dr. Holley has begun to examine existing, unpublished ceramic collections from the western part of Minnesota to better understand what wares, types, or styles of prehistoric pottery are present in the region.

END_OF_DOCUMENT_TOKEN_TO_BE_REPLACED

The State Shutdown has closed the Office of the State Archaeologist (OSA) and the State Historic Preservation Office (SHPO).  MnDOT has put contracts for archaeological work on hold.  At this point no new licenses to do archaeology in the state can be issued without a State Archaeologist and with the Minnesota Historical Society also closed for business.  This leaves private contractors working on projects on private, Tribal, and Federal land and other non-state public land if they had an archaeological survey license in place prior to the shutdown.  It will be difficult for the contract archaeologists to do background research on archaeological surveys and known sites on the parcels they are surveying with both the SHPO and OSA shutdown.  With the two main review agencies shutdown this will eventually also greatly hinder the federal review process here in Minnesota.

For now, the Federal level archaeologists, at the Natural Resources Conservation Service, Bureau of Indian Affairs, National Forests, US Army Corps of Engineers, and Fish and Wildlife Service are still working as usual as are Tribal archaeologists and most of the professors at the State’s universities and colleges.  The University of Minnesota (U of M) field school in Wadena County finished on schedule during the first week of the shutdown.  The U of M’s second field school in Dakota County started up this week.   Hamline University’s field school is also ongoing.

Legacy Amendment monies which in the last State fiscal biennium funded several statewide archaeological research projects have also not yet been approved for the current biennium.  Projects from the previous biennium were to have been completed on June 30, 2011.  However, we will all have to wait until after the shutdown to review the results, since there are no State agencies open to make the findings public. 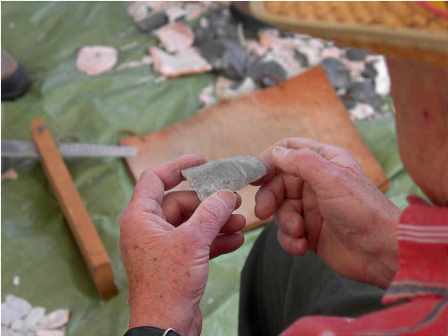 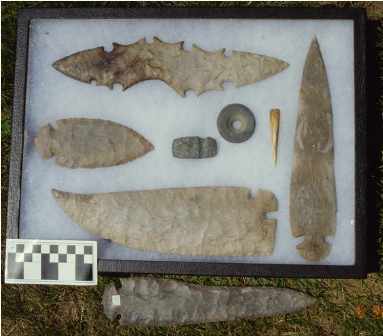 This coming Friday, June 24th and Saturday, June 25th the annual Pine City Knapp-In will be held at the North West Company Fur Post , 1.5 miles west of I-35 at the Pine City exit.  This annual event has been taking place for a couple of decades, allowing flintknappers, archaeologists, collectors, and the interested public a chance to see and discuss how stone tools are made.  The event is co-sponsored by the North West Company Fur Post and the Minnesota Knapping Guild. 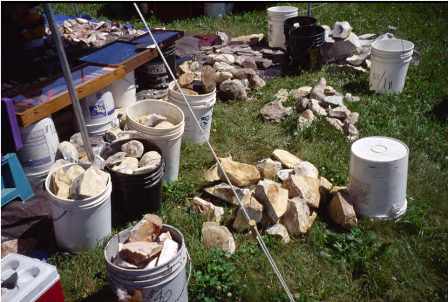 equipment, and a chair, and join in.  There are usually knapping tools and raw stone for sale.  The public is encouraged to watch and ask questions and to bring artifacts they have found for identification.  There is an admission fee to the site, but the Knapp-Inn is free.  Bring your family and spend some time touring the reconstructed fur post and then sit a spell, and watch, and visit with the flintknappers. 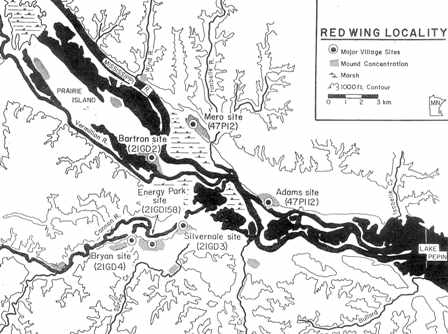 Dr. Ron Schirmer gave a lecture at the Anderson Center in Red Wing last Tuesday night.  The lecture was a Minnesota Archeology Week event.  Schirmer gave a summary of what had been accomplished bylast year’s (2010) Minnesota State University-Mankato Field School at the Red Wing Locality and the research goals for this year’s field school.  All of the archaeology that has taken place around Red Wing has focused on the large habitation and mound groups in the area.  Work at sites like Silvernale, Bryan, Energy Park, and Adams have looked at the Mississippian Period occupants of these sites, but the study of these people has raised questions about where they came from and what happened to them?  The Red Wing Locality was intensely occupied by Mississippian peoples for a relatively short time.  Are these Mississippian inhabitants local Woodland people who adopted some of the Mississippian traits of their neighbors to the southeast?   And given their relatively short occupation, probably only a couple of generations, where did they go? END_OF_DOCUMENT_TOKEN_TO_BE_REPLACED 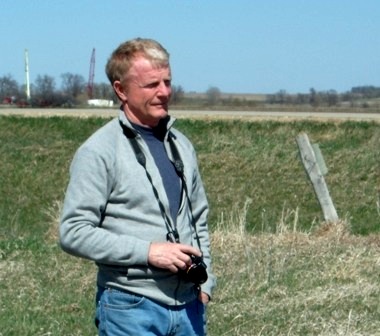 There will be a public reception prior to the event beginning at 6:30 pm at Room 1-147 in the Carlson School of Management Building at the University of Minnesota West Bank Campus with the Lecture to follow.  This link will take you to a flyer for the event. 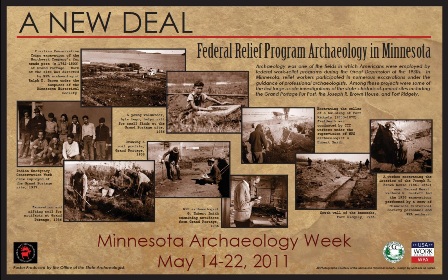 The Office of the State Archaeologist has posted the schedule of events for this year’s Minnesota Archaeology Week (MAW), May 14-22, 2011.  Check out the Before and After MAW section of the schedule for events that are taking place in the upcoming weeks, some as soon as this coming weekend. 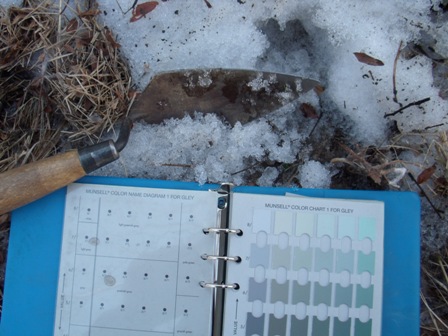 It is a sort of in-between time for archaeologists, they are anxious to get out in the field after being inside all winter, but also hoping it might still snow once more so that they can complete the report that they needed to have done a month ago.  This year with the abundance of snow and cold temperatures there should be lots of repots getting finished.  Here it is the first week of April and there is still an abundance of snow on the ground in the Twin Cities area with more forecast for the next couple of days.  Those portions of the fields that are free of snow are too wet to cross, or if attempted the mud clods adhering to your boots fast become as big as dinner plates.  It is best to wait for a good rain shower to clean some of the winter’s accumulation of dust and grime from the surface, firm it up, and improve visibility.  When I farmed it was always surprising how a good spring rainshower firmed up the soil and allowed us to easily navigate fields in which we had mired down only a few days before.  Like farmers most archaeological consultants are getting the field equipment ready for the coming season, making sure licenses and permits are in order, screens are repaired, the necessary field supplies are in hand or have been ordered, and many are hiring or are searching for seasonal staff (affectionately referred to as “woodchucks” for the amount of digging they do).

The Office of the State Archaeologist (OSA) recently added a couple of publications to their web site which are downloadable.  These include the 2010 Annual Report of the Office of the State Archaeologist which, along with a lot of bureaucratic information, also includes summaries of the projects that the OSA investigated.  There are also PDF versions of final reports from some of the Legacy Amendment funded projects including the Swift County archaeological survey, exploring the possibility of using LiDAR to survey for mounds and earthworks, and an examination of traditional cultural properties in the five county metro area.  The OSA also provides  a document summarizing the completed projects and the status of ongoing Legacy Amendment projects titled “A Preliminary Summary of the Accomplishments of the Statewide Survey of Historical and Archaeological Sites.”  This summary report is a good place to start to determine if you would like to get more in depth information about any of the projects before downloading the individual project reports which are rather large files.

The Spring 2011 issue of the Minnesota Archaeological Society (MAS) Newsletter is now available on line.  The MAS will hold its annual meeting and banquet on Friday, April 15 at 6:30 pm at Sorin Hall on the campus of Hamline University in St. Paul.  The speakers will be Anne Merriman and Chris Olson of Maritime Heritage Minnesota who will present their findings from “A Survey of the Mississippi River in Aitkin County and the Wreck of the Steamer Andy Gibson.”  For additional information or reservations check out the newsletter link above.

Remember to keep in mind that Minnesota Archaeology Week will be May 14th through the 22nd and to watch for event information in the weeks ahead. 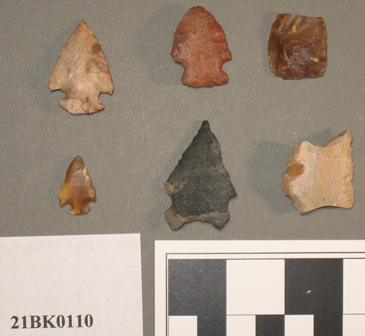 The Lake Superior Basin Workshop will be held this Friday and Saturday, March 18th and 19th at the Northwest Company Fur Post near Pine City, Minnesota.   The workshop is a rather informal gathering of archaeologists, avocational archaeologists, collectors, and the general public with lots of hands on opportunities to view artifacts and hear about ongoing projects.  Something of a last hurrah before the field season begins, the focus has traditionally been the archaeology of the Lake Superior Basin with archaeologists from Minnesota, Wisconsin, Michigan and Canada in attendance.  It has gradually expanded to include any regional topic and has facilitated collaboration between archaeologists from different states and countries.  END_OF_DOCUMENT_TOKEN_TO_BE_REPLACED