The study area was recently burned over in the fall 2011 Pagami Creek wildfire. 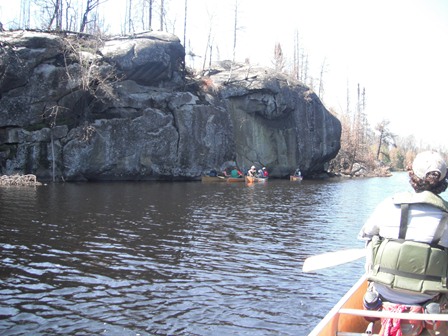 Surface visibility throughout the study area was on the order of 80-100%; providing a unique opportunity to inventory new sites while instructing the field school students on pedestrian survey methods, field recordation with Geo XT GPS units, and sketch mapping.  The students also joined rock art researcher Bob Evans, of Oklahoma City, Oklahoma, during a visit to the Island River pictograph site.  Mr. Evans provided an on-site lecture (in a relatively mosquito free location) regarding the cultural context of the Quetico-Superior pictograph sites and the techniques he developed for post-processing digital images of faded pictographs. 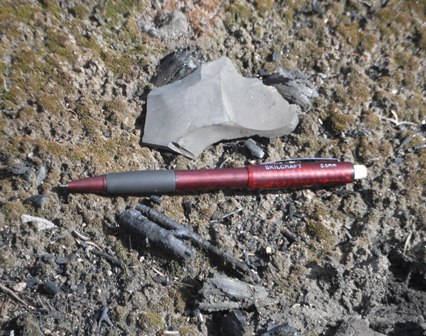 The initial focus of the field project was to identify new precontact sites in an area with dense stands of wild rice and a known potential for Terminal Woodland occupations.  However, the group also identified multiple aceramic lithic scatters comprised entirely of Knife Lake Siltstone on elevated terraces and relic beach-bench features .  The Marley Elanor site was found on what appears to be a relic lakeshore approximately 30m from the current shoreline of Rice Lake.  The site consists of

large quantities of primary reduction and bifacial thinning flakes of Knife Lake Siltstone (KLS), KLS blades, utilized and retouched flake tools of KLS, gunflint formation bifacial trimming flakes, a Vermillion formation biface, a KLS biface, and what has been provisionally typed as a KLS Plano point preform.  The lithic assemblage observed on the surface of the Marley Elenor site is estimated at 400-500 artifacts.  Based on root throws within the site area, the site appears to extend between .25-.75 meters below the surface. 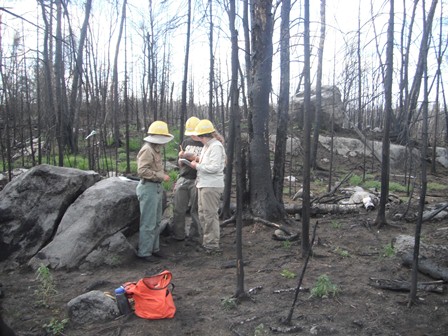 In total, the survey team documented approximately 15 new sites within the study area.  These sites included one historic, 2 Terminal Woodland habitations (Blackduck and Sandy Lake), and 12 lithic scatters.  The resulting data will facilitate the Forest’s management of cultural resources over the long-term, while also providing critical data for measuring the direct and indirect effects that wildfires pose to cultural resources in Northeastern Minnesota.