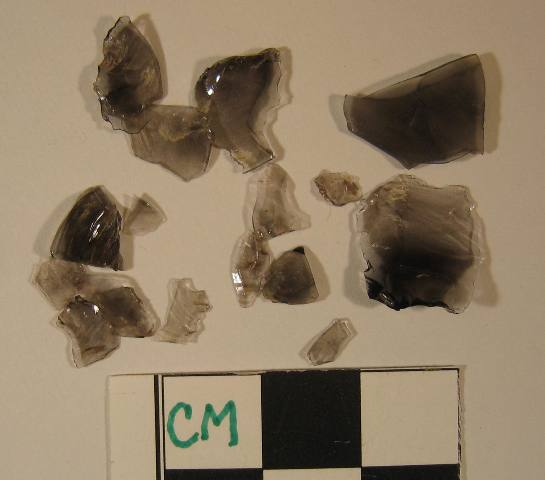 Finding obsidian artifacts in Minnesota always excites archaeologists, since without any nearby source of the material, it provides clear evidence of long distance travel or exchange.  (Much of the obsidian found in Minnesota has been sourced to Obsidian Cliff in Yellowstone National Park.)  In a presentation on Nov. 9th, Dave Radford, DNR Parks archaeologist, announced that recent survey excavations at the new Lake Vermilion State Park have recovered the largest number of obsidian flakes ever found on an archaeological  site in Minnesota, about 150 flakes.  This is equal to the total number of obsidian flakes previously recovered at all the archaeological sites in the state and is the most ever found at a single site, however it should be noted that the majority of the flakes are very small.

The excavators used 1/8 inch mesh on their screens instead of the standard 1/4 inch mesh.  As an example of the difference the change in mesh size can make, they rescreened the material from their initial shovel test, which was originally done using 1/4 inch mesh.  The first screening recovered 12 flakes and some fire cracked rock (4 of the flakes were obsidian).  They recovered an additional 40 flakes, including 26 chert and 14 obsidian flakes, when they used the smaller mesh.  (It should be noted that the numbers given are preliminary counts and final numbers will vary slightly.  I’m also not sure of the accuracy of the notes I took during Radford’s presentation)  The small size of the obsidian flakes suggests that they are the result of tool maintenance (resharpening tools) or from a late stage of tool manufacture, when a knapper is putting the finishing touches on a new tool.  By count obsidian makes up about 20% of the lithic collection.

The use of obsidian in northern Minnesota is usually associated with the Woodland time period.  There is a Woodland burial mound site only a few miles away where a small amount of obsidian has been found.  However, one of the characteristics of a Woodland site is the presence of pottery and there has been none found at this site.  This may be due to the small sample size from just a single 1 x 2 meter excavation unit and a f

A side-notched projectile point was recovered adjacent to a hearth feature.  It is made from Red River Chert and is not particularly diagnostic as to age.  The point might be Archaic or Woodland in age.  Enough calcined or burned bone was recovered from the hearth feature to obtain a radiocarbon date, so the question as to the age of the site will be answered.  The obsidian will also be sourced to determine where it originated.

The park survey also located a quarry site for a newly recognized chert.  A significant portion of the flakes recovered from the site are of this new material.  More on this new lithic source in a later post… 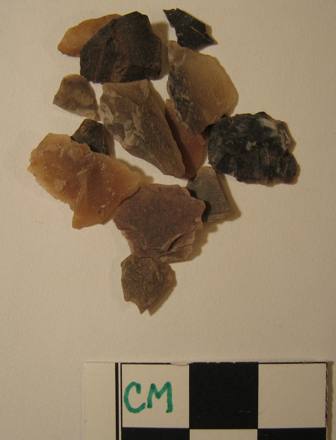